I must admit. When I first started out in the semi-professional world of crafting I was confused by all these hashtags I was seeing everywhere. Just like you, I thought it was silly. Until that is, I discovered this little symbol is a very powerful networking tool! It is quite possibly the most powerful tool used to give your post the broadest audience.
So, if you are skeptical of the use of this silly little icon; read on. You know the one. The one regularly used on your phone that you press to get to the proper department (as you most patiently wait on hold). It's most referred to as the number sign, the pound sign. And now as the hash.
I can't tell you how many comments I've read over the years regarding this little symbol. Comments from making fun of it's use as a hashtag to some actually being angered by its use. When I discovered why it was so widely used a little light bulb went off and I was quite impressed by whom ever thought of this clever way to collectively tag common interests!
Many of you know why this symbol is so widely use, but for those of you are as confused as I once was~
Here is what I have learned, within the crafting community,
regarding the use of the infamous #.
(read below) 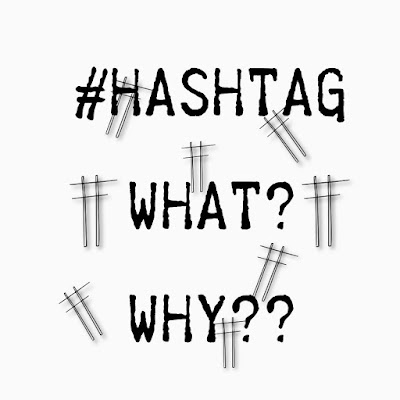 As part of the community of crafters, we desire to reach as many as we can with our creations. When you use a tag line in your post you are then allowing every single person associated with or subscribed to that tagline to come in contact with your specific post. I highlight the most popular subjects from my posts by attaching the # to the beginning of my tagline.
For example; in IG I will make a hashtag of companies whos products I've used, or specific highlights from the subject of my post and every person who has used that exact tagline, or subscribed to that tagline, will now have the opportunity to see my creation amongst the masses.
There are popular taglines that are used regularly. In my opinion, it is important to know which ones. (You'll become familiar with the best ones to use) For example; as a card maker I use the tagline #cardmaker in my post and now my card is a part of this hashtag and anyone who follows or subscribes to this hashtag will see my card. Allowing them to then click on my card which will lead them to my profile. Tada! Mission accomplished! Our hope is that they will want to subscribe to our social media page(s) and be inspired by our creations!


It's so much more than just networking, friends! When I had my older grandsons this summer I used the hashtag #knksummerchronicles on every post regarding them on my Facebook. Now I can go back and hit on that tagline and reminisce with every post about my precious boys!

Earlier I mentioned "associated with or subscribed to". On IG when a tagline ie hashtag has been created it is now open to being subscribed to or "followed". As seen in the photo below. I will follow a hashtag that interests me. Now posts using that specific tagline are part of my feed that I scroll through. You can also click the hashtag to view all related posts. It looks similar to profiles you follow. I often do this when looking for inspiration, or just to simply admire the creations. 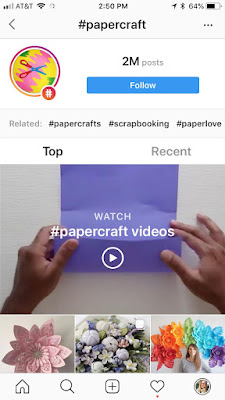 I also  mentioned  "exact tagline" because if you alter the tagline in the slightest it becomes a brand-new hashtag. For example; I often us the hashtag #createdtocreate and every post I have ever attached to this tagline now falls under that specific hashtag. If I were to misspell, or deviate by even one letter from the tagline, my post will not fall under this specific hashtag. You can see in the photo below that over 1 million people have used the #stamping tagline. By using this tagline I am allowing my card and/or creation (that I so proudly want to share) be seen by a huge audience! For this very reason, you see some with a long list of #hashtags included in their post.
See, it isn't silly after all! It genius really! 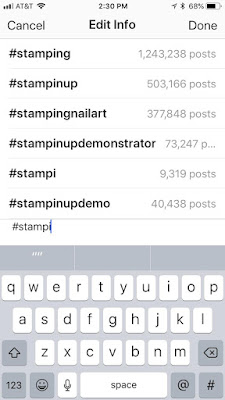 Friends, I am a novice at best. Both as a blogger and as creator in the paper crafting community.  I wanted to write this blog post because I know there are many who are confused by this subject. As one who has been poked fun at for using hashtags, I wanted to (perhaps) educate those who view it as silly, as well as, the many who would benefit from the use of # as a networking tool.
I do hope you found this helpful!
Forgive any grammar mistakes you may find.
I am always open to constructive criticism or correction.
Just please know, I write my blogs for complete enjoyment and do not stress over possible
mistakes within the layout of my post.
As always~
Thanks for spending time with me today!
Until next time~
Be blessed, friends!
Bobbie Sue
at 3:15 PM

Faith, family and papercrafting are my love languages.

Bobbie Sue McConathy
Hello friends! Welcome to my papercrafting blog! I rediscovered my love of papercrafting in 2013 as a way to deal with anxiety and chronic pain. I have since labeled it my saving grace as it has become incredibly therapeutic and brings me such joy. I only began seriously honing since 2016 and am excited to learn new skills and approaches to the craft! I draw the most amazing inspiration from the paper crafting community. I am celebrating my 50's and I couldn't be more excited! I am a firm believer in Jesus Christ! I am married to a wonderful man who loves the Lord and adores me! We were secretly sweet on one another in high school and count ourselves blessed to have reconnected some 25 years later in July of 2011! We have a blended family of 7 adult children ranging in age from 26-32. We have 9 precious grandchildren! 4 boys and 5 girls! Ranging in age from under 1 yr to 13 years old. My heart is so full and my life so blessed. I'd love to know you've been here. Be blessed!